Senate Bill 385 was introduced by its sponsor, Senator Jim Stamas, and unanimously passed by the Senate Regulatory Reform committee in September of 2017. The bill passed both the House and Senate and was signed by the Governor in December, becoming new law with Public Act 197 of 2017.  SB 385 amends section 339.915a of the Michigan Occupational Code and allows Michigan-based collection agencies to have on-site attorneys to represent the original creditor in some circumstances 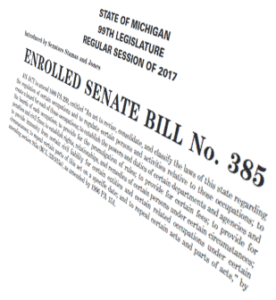 The Governor, by signing the bill, implements this new law and the changes to the Michigan Occupational Code are long overdue for our great state.  These modifications will enhance the protection of Michigan consumers through improved compliance efforts leading to a more simplified, secure, and better consumer experience for the Michiganders collectors work with on a day-to-day basis.

Subscribe to our email newsletter for useful tips and valuable resources, sent out every month!

Our Effective Debt Collection white paper provides tips and advice from the pros on how to manage your collections.